Hokay, so it’s been a week.  Don’t actually have a ton to report yet, but I was starting to feel bad about the lack of updates so here it goes anyway: 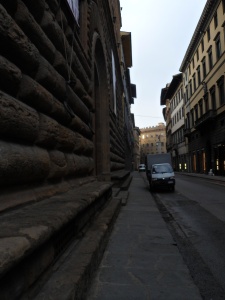 –
–
Catch you soon : )
–
–
–
*Not a keytar, but rather just a guitar with piano keys on it that were apparently responsible for pulling the strings taut.  The experts with us couldn’t tell how it would have been tuned (or played, for that matter), and refer to it as a failed experiment…which of course just means that we were one successful experiment away from well-bred citizens of the 18th century twanging away on keyboards to prove their musical prowess.  For all those pianoforte scenes in Austen…*sigh,* what could have been.
–
–
**My secret wish, which will probably not happen, is to get the chance to go see the Galleria Borghese.  It seems just a bit too off-the-beaten-path for a group that’s only going to be there for four days, but I keep hoping I’m wrong and I’ll finally get to see my Bernini.  Lord but I do love Bernini.
Leave a comment

Week of freedom over, back to work — now with the knowledge that we are over halfway through our time here and are now counting down instead of up  O.o

I am carefully squeezing the last drops of permitted laziness out of my Sunday (it’s called being ‘pigre’ here, and I’m a big fan), but just wanted to let you know that it’s very likely I won’t get to post again until next weekend.  The last week of October was always going to be one of the busiest times here, because we’ve got those visiting professors here on top of regular classes, and now this insanity is finally upon us.  Over the next four days, currently looking at:

…Just move, don’t think, look up and it’s the weekend.  Fingers crossed : )
–
BUT, in the meantime, more Italian YouTube, because it is an addiction that cannot be helped.  I am sorry to inform my father that there is no such thing as an Italian Sesame Street, but I hereby offer to screw up your sense of the familiar* with five minutes of the film known here as “La Storia Fantastica.”  This was one of the first things I made sure I knew how to say, so:
Tu hai ucciso mi padre, preparate a morir!
–
–
Have a good week ^^
–
–
*Just a sort of fyi, but anyone who’s going to be studying here may want to pay attention to that feeling of so-close-but-so-wrong, because it’s going to be like that ALL THE TIME.  It’s fun if you let it be, but just make sure you’re not overly attached to your comfort zone ; )
Leave a comment

Break is winding down (noooooo), and I’m spending the last couple days going nowhere near homework and enjoying the hell out of free time.  Observe: 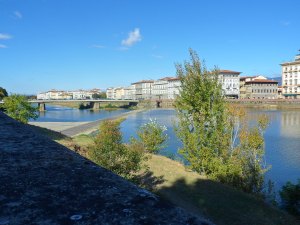 Over to you guys : )
–
–
–
*You know the famous Medici family?  Well Cosimo de’ Medici (basically the founder of the family’s wealth and position) decided to build a grand new house, a palazzo, in the middle of town.  Brunelleschi, THE architect of the Renaissance and the mind behind the dome of the Cathedral, created a design.  But this design was, in fact, a little too grand for Cosimo; he rejected it, and Brunelleschi supposedly pitched a fit and smashed the model.**  But then the rejected design is picked up by another Florentine banker, Luca Pitti — and generations later, when the Medici have become actual nobility, they buy the place and double its size and fancify it like you wouldn’t believe, ultimately building a private elevated walkway (the Vasari Corridor) all the way from the palace to their offices (now the Uffizi Gallery) on the other side of the river.  Just…wikipedia.
–
–
**Architects at the time apparently depended more on models than plans; that is, they actually built little wood mock-ups of their buildings to show what the final project would look like, and this was what got presented to their patrons.  For some reason I find this really fantastic.  In fact, one of my favorite parts of the museums here (and especially the Museo dell’Opera del Duomo) is getting to look at these models…and if I ever get bored and need a new hobby, building replicas of these seems like it might be more fun than ships in a bottle.
–
–
***Hot chocolate in Italy is called cioccolata calda, and it is not *actually* hot chocolate in the way we think of it — that is, its richness goes way beyond the taste of a liquid with powder, and it’s so thick that it’s almost like drinking hot pudding.
–
…But that sounds gross, so just know that I mean it in a good way.
Leave a comment

It only took me most of my break, but I’m finally feeling good and productive; spent most of today tearing back and forth between readings for class and a couple sketches and lots and lots of notes about ideas for my senior art show, and while I have *finished* nothing, I have put an admirable amount of energy into getting things kinda-started.

But now, while I still have a bit more I’d like to get done tonight, I would really like to waste some time first.  So quick run-down of the last couple days:

Back to work : )
———————————[For reasons unknown this thing is eating lines between paragraphs.  Sorry]——————-
*Still loving Italian, and I am dead set on getting the hang of it eventually, but by this time I can readily admit that having to attempt it every single day is a bit exhausting.  And frustrating, especially at dinner; between Nino, Gabriella and Alessandra, there’s pretty much always adult-level conversation going on (not to mention the times when Nino and Gabriella’s grown children are over), and I can’t really add to it without immediately dragging the whole exchange back down to grade school and feeling like an idiot.
———
The revelation of the moment being, I think, that I just miss talking.  After all, even as a typically non-talkative person one still gets attacks of loquacity, and I think that what I could really use at the moment is just the opportunity for a good old-fashioned rant delivered at high speed and drawing on a superfluously complicated vocabulary somewhere south of the vernacular.
———
Guess I’m just not a fan of baby steps.
————————————————————————————————————————————
**Not at all related to anything study abroad, but I really enjoyed this, and if it is not the nerdiest thing you have seen all day then I owe you an apology cookie:  The Dance Your PhD Competition
Leave a comment

Sorry nothing got in here last night, internet keeled over again.

Not too much to report anyway, though; yesterday was a really nice day, and I was still pretty attached to being lazy, so I just went for a walk through the center of town and then down by the river. 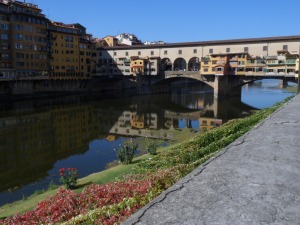 And, although I had money on me and would have been inclined to part with it had I met with something pretty, it stayed strictly a walk because yesterday was a Monday.  Monday, in Florence, is the day of the week for the half of the city that didn’t shut down on Sunday to finally do so — so you step out to try to go somewhere or do something, and niente.

But as I said, yesterday was a very pleasant day regardless, and today I think I’m going to attempt to make it into the Uffizi Gallery on my fancy museum pass.  After that…we’ll see what it feels like a day for : )

Also, just a heads up: if blog updates thin out a little over the next couple days, that will be because I am (finally) updating that student resources page.

P.S. — This ties in with absolutely nothing, but did you know that being in another country makes your internet automatically present itself in that country’s language?  So that if, for example, you go to look up the trailer for the “Avengers” movie, you will always get the Italian version first?

It is also important to note that Italians prefer dubbing to subtitles.  And that, for someone who is already familiar with ‘ Samuel L. Jackson’s voice, this is hilarious.

(Day 49) Doing Nothing, but with Great Vigor

Not much to report today, as I was sleeping a bit too much to have time to really start anything.  So instead, random updates related to Italian:

Overall, it remains a complicated situation, but I guess the briefest summary is as follows;

I will have to be working on that gap in my vocabularies.

Apologies due again, apparently, because it is very clearly Saturday and not Friday 😦

SO, crazy week — between all that end-of-class stuff going on, my epic two-weeks-and-counting cold got way worse, and I ended up having to go to the doctor and start the dreaded antibiotics.  But none of that matters now, because we’ve made it; I took my test, I went to the last on-site visit, I did the readings, I (cut it very close but I) finished my paper, and I’ve accidentally gone and gotten about 14 hours of sleep so we’re finally good to go.

Also have I mentioned that I am on ~*BREAK*~.

Think I’ll just go ahead and do a brief run-down of pretty much everything that’s been up lately, but first I’d just like to say that I realize that I have answered basically no emails since around Tuesday or Wednesday.  That would be on account of me running back and forth between homework and passed-out-sleeping, so please know that I was not ignoring you and I will get back to you as soon as I can. 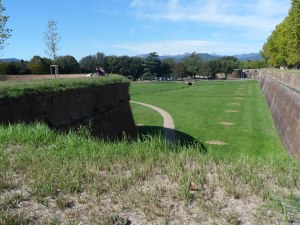 And I had other stuff I was hoping to say, which I will hopefully still remember tomorrow, but I have just this second gone exhausted again and I think we’re going to have to call it a night.  But I can promise that, for the next week, I’ll be able to get something on the blog each and every day, so hold on to your hats because here comes postage.

Round of emails tomorrow to everyone who’s sent me one lately, and ttys anyway to everyone else : )

*Because Florence is in a valley, wind is pretty rare here, because it takes more than a light breeze to make it past the hills and down into the city.  But this apparently means that the winds that *do* make it down are real thugs, so that’s fun.
Leave a comment