Slightly embarrassed to say that there is no reason whatsoever for me to be writing right now — it’s just that I realized that today was our ninetieth day in Florence, and turns out I’m shallow enough to want a post to mark that.

…Nope, there is truly no other reason to be here.  So, although all I want out of life right now is the chance to watch Monty Python and the Holy Grail, I suppose it’s back to procrastinating on my homework.

Urghh *shudder.*  But, in the immortal words of King Arthur (and discounting “Run away!” as unhelpful):

“You make me sad.

Finally made it back in, and what I would like to do now is provide some variation from the bullet-lists and make up for the posting delay with a giant picspam.

However, what my internet and available time will *allow* me to do is post a couple photos (with more to come as soon as the month rolls over on my internet key) and do a quick bullet list.  So. 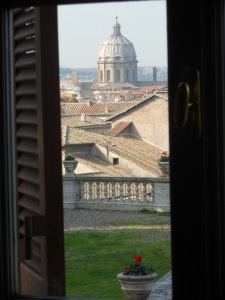 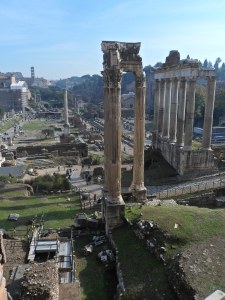 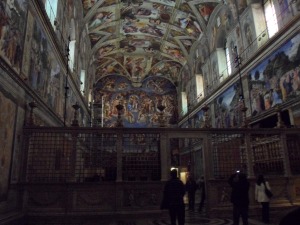 *The names of all these foods sound so much better in Italian: crostini con cavolo nero e fagioli, penne ai tre cavoli, arista all’olio nuovo con puree di patate, torta di melee.  Italian changes the off-putting ‘eggplant’ into my favorite ‘melanzana’ (which I can and will keep talking about), turns the baffling ‘pineapple’ into the ever-fun ‘ananas,’ makes plain broth into ‘minestrina’, and even ‘broccoli’ can be softened into ‘broccolini’ (which, incidentally, is delicious and is weirdly *the* thing on which I am most likely to overeat).  It is the world’s unparalleled language at dinnertime.

…But then again, English does have snickerdoodles.  Tough call.

Shouldn’t be here, because I’m in the middle of studying for my Italian final (which is already tomorrow, and could someone please explain what happened there), but real quick:

–And that’s Tuesday.  Basically nothing going on, but people were being nice all over the place and I guess I felt it was worth mentioning : )
–
Also, since this is likely the last time I’ll be in until Monday, one last randomly-chosen pic:
–

Just a corner of the interior courtyard of Palazzo Vecchio, right as you walk in the tall front doors (I’m literally standing in the doorway).  The courtyard opens up to a way more spacious chamber beyond, and all of this is only a tiny fraction of the palace as a whole, but this right here is the first thing important visitors would have seen when walking into the grand state palace / civic heart of Florence…and I think I kinda like it.  Makes me want to scrawl all over a hallway a little bit, and even though I never eat them it somehow reminds me pleasantly of Twinkies.

…Anyway, I really should be studying, so I’ll see you after Rome.  Great weeks, everybody!

Alright, we’re going to try this; I’m approaching the data limit on my internet key, but I feel like you guys deserve an update and some nice sunshine-filled pictures before we up and leave for most of a week.

Thursday, my art history/Medici class took us to Casa Buonarroti, the museum housing many of Michelangelo’s early works.  It became an automatic favorite because it’s just fun to look at; for one thing, it’s fascinating to get to see the drawings and sculpture studies that fed Michelangelo’s development, but quite independent of that is that it turns out that even Michelangelo’s quick-study early work is wonderful, all twisty torsos and floaty figures and everywhere that dynamic BAM quality that made him a legend.  Good stuff : )

Oh, also, they had another Renaissance architectural model!  *Obviously* you guys all remember those, because I mentioned them maybe once in an offhand footnote ages ago, but bottom line is that Michelangelo was once commissioned to design the facade of a church and he did and he built one of those models I love:

The rest of Thursday was just more school stuff, blah blah, and then this weekend was sunny and gorgeous and I got out of the apartment for a while:

(Lower eastern side of the Duomo) 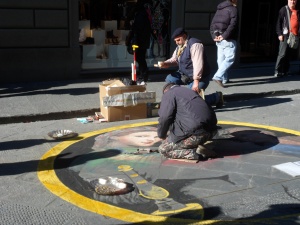 Traipsed around for a good long while doing errands, came back to a roommate-less room (reason being that she betook herself off to Amsterdam for the weekend, in case I haven’t mentioned), and have since experienced an utterly astonishing productivity streak; it’s been a little interrupted because of all the internet/list-making/stare-at-the-wall breaks, but I’ve had out-of-nowhere ideas for all my ongoing projects, roughed out outlines, done readings, made plans for personal work, and even got in some of those quick sketches we’re supposed to be doing.

Such a novelty to be actually on top of things : )

So, that was this weekend, and for this week we’re looking at a bunch of classes, work study, two on-site visits, an oral report, an orientation meeting, and our Italian final, all by Wednesday.  Thursday morning, off for Rome by 8:00 am.*

I may be back in prior to that, but if not, I’ll definitely be seeing you soon after.  In the meantime, happy rest-of-Sunday!

*Also, we got our itinerary for Rome, and YAY because we’re going to the Galleria Borghese *\o/*  …That is all  : )

Posted by Erin M on November 13, 2011 in Art, Classes, Persons & Peoples, The City, Travel and Touristing

It appears that we’ve just dropped another week, so we are now officially down to 30 days left in Florence.  And, because we only have four class days before Rome and will have only 19 total days after, this means that it is already time to start panicking about what is left on the Florence to-do list and deciding what places/things are worth a final re-visit.  It is inexpressibly weird to be thinking like this.

It has only just occurred to me, for example, that at some point in the near future I will not be walking past the comforting orange-and-white mass of the Duomo every day.  Guys, there will be a *last time* I see the Duomo.

I’m sure that by the end I’ll feel like I should emote a little about all this, but let’s skip it for now and give the brief update for this week.  Which is as follows:

Here we go : )
–
(P.S. — Just to clear up any confusion, yes, I will be sad to leave Florence.  But yes, I am also beyond-words excited to get home again, and will be fully ready to get on that plane and come back and start making everybody cookies.  So pick out your favorite kind, and just know for dead certain that I *am* capable of having more than one emotion at a time and thus am still thinking about you and miss you guys and already can’t wait to see you again <3)
Leave a comment

I have now been called four times on not having updated recently (even though the last one was Thursday), so okey-doke, here are my great secret doings of late: 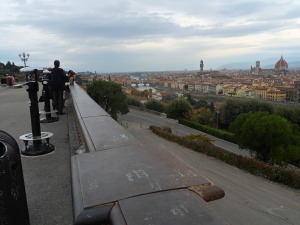 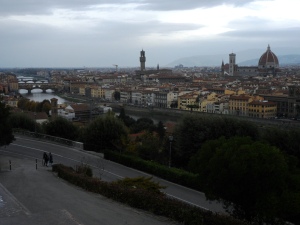 And…that is it.  I can feel your jealousy from an ocean away, but try to rein it in, okay?
–
As far as this week, we’re going to three places I haven’t actually been before, so that is automatically something I want to blog about.  And if anything else throws a blip on the Excite-o-Mat, I will happily stroll back in to ramble.  Otherwise you can assume silence to mean that I am either continuing the life of an ascetic academic or have been kidnapped by corsairs.  Maybe both.
–
Anyway, my brain feels kind of broken right now, so think I’m going to go dink around on the internet for awhile and give it time to recuperate.  Have a great Sunday night/Monday!
–
–
–
*When it becomes boring, you can spice up the pigeon-counting game by adding a second step, called ‘Guess Which Pigeons are Diseased.’  Or, since the answer to that is probably ‘all of them,’ you can also try to ‘Guess Which Pigeon Will Trigger the Next Global Pandemic,’ etc.  So many pigeons, so many questions, hours of fun at your fingertips ; )
Leave a comment

Been getting caught up in the sudden appearance of more homework than I thought I had, so sorry for the continued absenteeism — and thank you for your continuing patience to those who have sent me emails, I will have replied to all of you by tomorrow.

Still actually have stuff I have to do tonight, so this will be kind of brief, but I had a good day today and happy moods are worth sharing.  So:

Have to do a project/paper and preparation for an oral report this weekend, but shouldn’t be bad.  Then it’s a week and a half until Rome, three weeks until Thanksgiving, five weeks til home.  Woah.
–
–
–
*Funnily enough, all of my truly successful conversations have started with me explaining that I don’t speak Italian.  God bless low expectations?
Leave a comment

Posted by Erin M on November 3, 2011 in Classes, Language, Persons & Peoples, The City